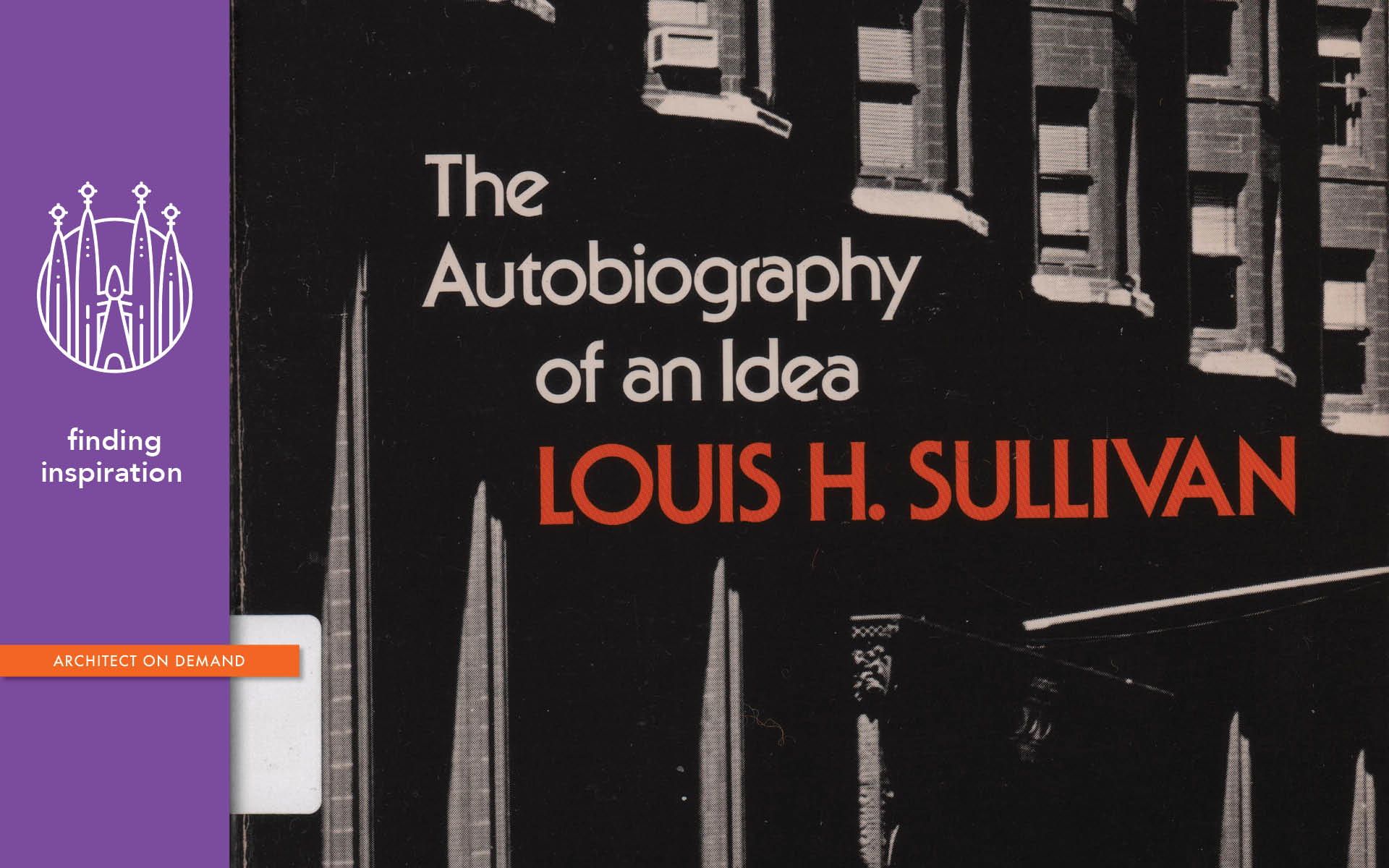 Books on Architecture: Louis Sullivan’s The Autobiography of an Idea

A client wondered: “If I only have room in my backpack for three books on architecture which ones should they be?” I promised to get back to him and, in turn, asked a friend — she is the authority — to name three books that taught her everything she needed to know about architecture. She instantly replied that absolutely number one is Louis Sullivan’s The Autobiography of an Idea.

Thus, I borrowed a copy from a library the same day and have immersed myself in it. I found it fascinating.

Originally published in 1924, the year of Louis Henri Sullivan’s death, it is a history of a man’s ability to do what he wills to do. It’s the intensely personal account of significant milestones in the architect’s life as they shape his beliefs.

Louis Henri Sullivan (1856-1924) traces the origins of his philosophy to his youth. He reminisces at length about his formative years spent on his grandparents’ farm where he felt one with nature. He describes his “constant and intense love of the open.”

It is Sullivan’s fundamental belief that “the child determines the man” and that “childhood remains sequestered within us unchanged.” He instinctively or intuitively starts to have faith in his own ability from a very young age.

As a result, Sullivan thinks of a man as a gloriously capable being, master of his own destiny. Interestingly, the kind of vigorous intellectual and instinctual power that Sullivan attributes to a man is an inversion of the commonly accepted theological concept at the time.

Arriving at the truth by tireless pursuit: self-education 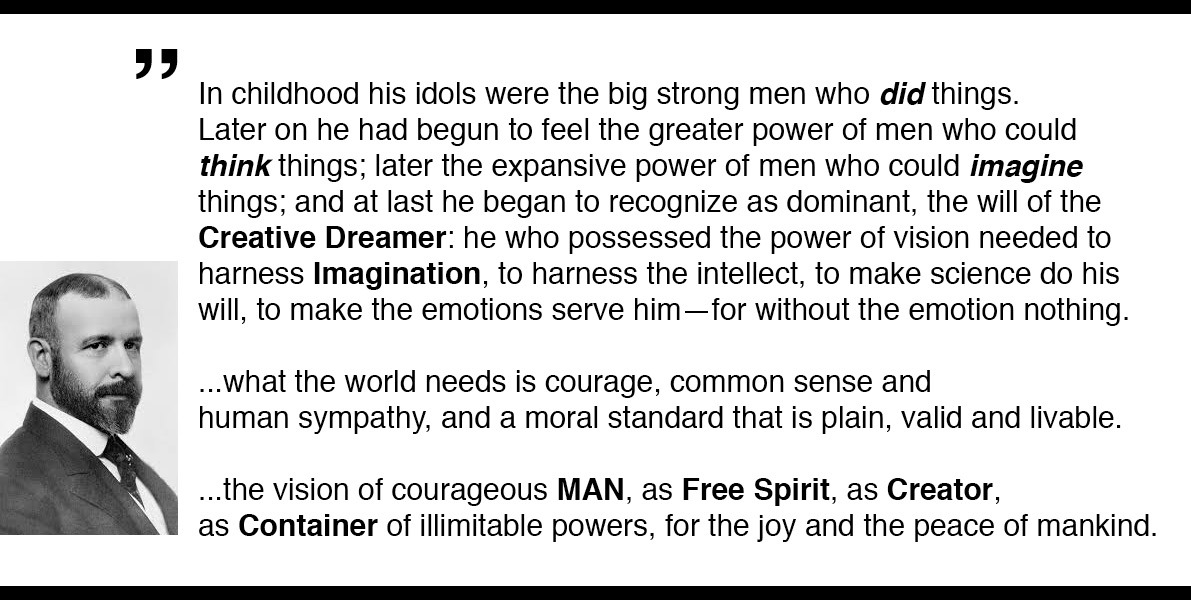 Searching for “stability in truth,” Sullivan reveals his acute sensitivity to surroundings. Sifting through knowledge as if he were a miner, he learns to think and act for himself, seldom asking advice. He has a keen gift “for separating the essential.”

Despite his hunger for knowledge, as a young boy, Louis has an aversion to school.  Then, at the age of twelve, he comes across a dignified-looking man, who, according to a workman is an “archeetec” that “draws beautiful buildings out of his head.” As soon as the boy realizes that its his heart’s desire to become an architect, he aspires to get the appropriate education. And loses no time once he sees an objective.

Louis learns “self-discipline of self-power” from Moses Woolson, his most revered high school teacher, who provides a “deep and sound foundation for the masterful free spirit.”

Sullivan strives for directness, simplicity, and “singleness of purpose.” With the help of his tutor in mathematics he realizes a need to have a reason for everything, with “NO EXCEPTION.” As he believes this approach applies to architecture, he sets out to “explore, examine, and cross-examine” in order “to interpret.”

Accordingly, he works out a theory that every problem — in itself — suggests its own solution.

At age 18, he spends three days in Rome and two of them in the Michelangelo’s Sistine Chapel. He is able to “see into it.” Thus, Sullivan writes in third person: “Alone, he communed in the silence with a Super-Man. He felt that he saw a great Free Spirit, his first great Adventurer, the first man with a Great Voice, whose speech was Elemental. The first mighty Craftsman.”

In Michelangelo he finds a kindred spirit. Like Michelangelo before him, Louis Henri Sullivan endeavors to create beauty for mankind. He believes in his own strength.

Discerning the workings of the soul within: self-expression

Immersed in the flow of life, Sullivan describes how he researches the invisible to inquire what might be there. Inspired by his own vision, by his free spirit, he is ready to go to work. Sensitive to social forces, Sullivan writes: “…what the world needs is courage, common sense and human sympathy, and a moral standard that is plain, valid and livable.”

Harnessing imagination: “making buildings out of head, not out of books”

Sullivan rejects “Five Orders of Architecture” and various styles; to him they are dead. Instead of studying architecture from books, he roams the streets. He is looking at buildings as he wanders, examining them “with curious care.” Poetic and eager, he is searching for something fresh.

Having uncompromising faith in life: self-recognition

Louis Sullivan, with his profound faith in the creative power and glory of man and in freedom of self-expression, insightfully believes that creative energy shall find its form-image. It shall be set forth by “the highest craftsmanship and the artistry of living joyously in stable equilibrium.”

The Autobiography of an Idea welcomes the dawning light of modern day, “the super-power of Democratic Man,” capable of clear vision imbued with the impulse of the “democratic idea.”

In the new world Sullivan describes, architecture must “intelligently serve, not suppress.” According to Sullivan, the function of a building must predetermine and organize its form. To him, that is the universal law that has NO EXCEPTION.

Astounding! This theory revolutionized American architecture. Hence, when it comes to influential books on “enchanting land of architecture,” Louis Sullivan’s The Autobiography of an Idea is spirited and timeless. I am sure it has made a significant impact on many generations with its uncompromising conviction .